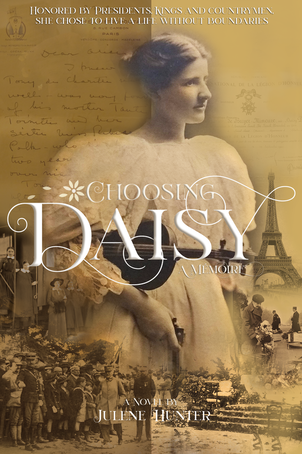 A true story of an American hero honored by Presidents, Kings and countrymen during two world wars. And you’ve never heard of her, until now.
On the brink of The Gilded Age, young Daisy finds herself overshadowed by her talented older siblings — Willis Polk the architect, Daniel Polk the vaudeville banjo artist and Endie the lyric opera ingénue. Searching for more in life than is expected, her journey is a tour-de-force.
She survives tornadoes, earthquakes, family tragedies, and societal pressure leaving everything behind for Europe on the brink of war. Undaunted and determined, she commits to the war effort helping thousands of stranded Americans return home, campaigns for Belgium, crosses enemy lines into Berlin, and rebuilds an entire war ravaged French town on the Western Front.
From booming Kansas City to bohemian San Francisco and Belle Epoque France, Daisy offers a first hand view of history in encounters with the artists, industrialists and leaders of the time including Susan B. Anthony, Giacomo Puccini, Bernard Maybeck, Thomas Edison, Jack London, Cole Porter, Herbert and Lou Hoover, William Bourn, Anne Morgan, Phoebe Hearst and her patrons the Crocker Family to name a few.
Fiercely resolved to never marry, Daisy finds great love and heartbreak in France during the war when she meets The General. Now Countess deBuyer Mimeure, she uses her title to raise funds to help Baccarat, and other war ravaged businesses sell luxuries to the wealthy Americans building enormous estates with her architect brother back home. She builds orphanages, and hospitals. Often referred to as Madame La General for her leadership and spirit, she is one unsung hero among a field of many women who aided in humanitarian works during the horrors of two World Wars. It’s time for Daisy’s story to be told.

You can learn more and read early excerpts of the novel at ChoosingDaisy.com

Click on a book to flip through the pages.
Inspired by my childhood favorites; Dr. Suess, Maurice Sendak, Shel Silverstein, James Thurber and Lewis Carroll -
​These rhyming tales are written for the young-at-heart.